Royal Blacksmith is a story driven multiplayer(guild based) shop-sim game. It sounds kinda too mixed and too complex for one-indie-man to handle but I've been doing this for many years. Mixing genres is one of my skills.

You will start as a John Doe who just became adult enought to be kicked out of orphans' home. You were found abandoned at an old house next to the crossroad - it was the only thing that was inherited by you. Your jorney will start from that point. Choose your race, starting skills, gender as an introduction to the game. Then you will get your first customers who's looking for new swords and bows. Global goal is to survive, gain all the money and fame that you can reach for. Or just drag whole kingdom to hell.

- Plot with different endings
- Large kingdom map to explore, develop and (at some point) rule(that is kinda spoiler)
- Converting final game goal to your endless advantage(quest line to empower your hero and your property)
- Guild based multiplayer - each player can set up own kingdom and invite others to join and develop it together
- Tons of crafting, items, improvements, buffs, runes, potions, spells, etc
- Crafters that your can hire to help you out - they can teach, study, build, repair, buff, carve, charm
- Your favorite customers can be sent to the quests - equip them for success
- Interactive quests as mini-battles - discovery and boss battles(similar to Royal Heroes)
- 100% steam integration - all communication with other players and forming guilds via steam services
- No 3rd party stuff
- Pixel art - some of it will be donated to public use on demand

The game's plot tell us the story about an unknown Orphan. In course of time a player will discover the story of his past. There are few endings - good, evil and diablic.

Crafting is a core mechanic - hundred of items to discover. Mostly - for selling, sometimes for upgrading your favorite customers before sending them to their next quest.
Just crafting is not enought. So some hirelings will be able to buff items in different ways - adding runes, enchanting with special powers, carving protection symbols ,even just grinding can improve quality.
In order to craft complex stuff you need a skilled crafter. So in this game the crafters can teach one another. Blacksmith can teach his skill to Enchanter so then he will be able to craft magic hammers. Every action in the game corresponds with certain skill. Skills are not picked but increased when used, and can be taught by someone more expirienced.

There is a multi-verse - every player can play in his own or someone's else kingdom. At some point the player will become the ruler of kingdom or obey. The players will be able to switch kingdom - transfering most of upgrades with them. So the most powerfull kingdom is the one that got most powerfull players.
Government options depends on plot choices. Evil governors have some cruel edicts to enlist while Good governors have more positive ones.
I'd like to mention - the whole game will be based within steam. Game will work till steam is up - no matter how many players are online - a lot or just one - game will work regardless and designed to be fun as a solo or coop expirience. There is no 3rd party stuff or extra registrations.

- Roadmap for a year after released - game will be updated, fixed, improved based on your comments 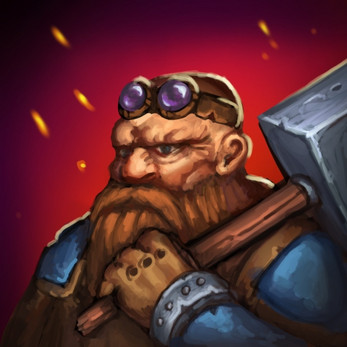